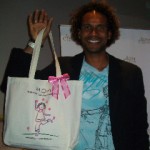 Genai Kerr, U.S. Olympic Silver Medalist, got into water polo by accident. He followed the sound of whistles he believed was coming from a basketball game right into the high school water polo practice. He decided to replace track and basketball, which eventually earned him the coveted title of an All-American in 1998 and 1999. Genai has been a U.S. Ambassador for the USADA (U.S. Antidoping Agency) since 2003, promoting clean sports for young athletes. He loved the No Mommy’s Recycled Tote Bag and said, “Thank you for spoiling my unborn nephew.”

It is SO cool to see Genai Kerr with a No Mommy’s Perfect Tote Bag … in my dreams he kept it for himself and takes it to the gym! Hey Genai, you can order more for your nieces, nephews, friends, etc.! You have found the “perfect” gift. 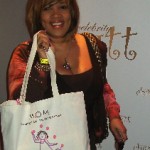 Comedian and The Insider correspondent Niecy Nash is known for her roles on Reno 911 and Clean House. Most recently she fulfilled her childhood dream of being a professional dancer on the reality smash Dancing With the Stars, where she made it into the top 5.

The rare spare time she has is dedicated to family, church, and charities, including the prevention and awareness of HIV/AIDS, breast cancer, school violence, and domestic abuse. When asked what her hobbies are, she proudly replies “motherhood”, which she considers her greatest success in life.

No matter what role he does he’ll always be Hercules, but Kevin Sorbo doesn’t mind. He started out traveling the world for three years as a model before landing the coveted role, which led to over 30 TV and movie appearances.

Since 1997 he has been a spokesperson for A World Fit For Kids, a non-profit organization that provides gang, drug, and dropout prevention to teens through mentoring programs. He was recently named national spokesperson as successor to Arnold Schwarzenegger for The Afterschool Alliance, a nonprofit organization working to ensure that all children have access to safe, enriching afterschool programs.