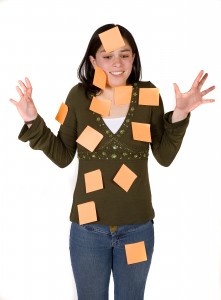 How do you define "Enough?'

There I was, lying awake at 3 am on a Sunday morning and feeling my heart skip a beat because I had so much to do and not enough time. Have you ever felt that way? Between obligations to church, school, home, work and other extracurricular activities I was stressed to the point I was losing sleep.   Ugh!

I think it’s rather ironic how easy it is to jump on the wagon of commitments and difficult to get off.   I talk to moms weekly about being overcommitted and here I was in desperate need of my own advice.   I knew I needed to scale down, but it was difficult because all the things I was involved in were worthwhile and enjoyable.

So I had to define what was “enough.”  You know, that nebulous space between needing more and having too much.  Or even practically, asking the question what were those things that I could do that were manageable that I could still be the wife and mother that I wanted to be.

So, I made a list.  Do you like lists?  I love lists, especially when I can cross things off.   So I started crossing things off…took them back…and crossed them off again.  While there was a sadness attached to the relinquishment, there was also freedom to enjoy a more simplified life….or at least an attempt at a more manageable one!   Truthfully, there are still a few more things I’m going to have let go of yet….but right now, it’s enough.

How do you define “enough?”