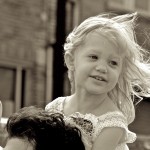 As the mother of four, I often find myself laughing hysterically at the dinner table listening to the stories and one-liners my kids — especially the older two, ages 8 and 6 — come up with. My 6-year-old son Wrigley has recently started watching “The Sandlot” every chance he gets. As a baseball fan, it was always a favorite of mine when I was younger. Wrigley — who was named after Wrigley Field, home of the Chicago Cubs — quotes the movie every chance he gets. It was funny at first, but has gotten a tad annoying. Anyway, one of the characters on the movie is nicknamed Ya Ya and his middle name is Allen, which is the same at Wrigley’s. Wrigley recently asked me, “Mommy, why did you name me Wrigley instead of Ya Ya?” One thing I am adamant about is my family sitting around the table for meals. We hold hands and say grace, thanking the Lord for His blessings upon our family. Some of our best times are spent talking over meals. A few months ago, Brooklyn, my 8-year-old, was particularly enjoying what I cooked for dinner (I don’t even remember what it was now) and she said “Mommy, you’re a really good cooker. I wish you could be a cafeteria lady at my school so all my friends could eat all the good food you make.” Just a few nights ago, Brooklyn was helping clear off the table as I was washing supper dishes. She told me, “Mommy, you should go back to school for cooking. You’d be really popular.” She definitely gives me more credit in the kitchen than is due. A few weeks ago, I mentioned I would like to have a Snuggie. Brooklyn said “Mom, I have the perfect plan for you to get a Snuggie.” I said I could just go to the store and buy myself one. She said, “No, I have a better idea. You could just tell Aunt Peggy you’d like one. I told her I wanted a water ball filled with glitter and she bought it for me. If you tell her you want a Snuggie, she’ll buy you one.” It’s obvious Miss Brooklyn is awfully spoiled by her Aunt Peggy. One of the first times I took my twins (who are now 2 years old) to my workplace, Wrigley had to play big brother with Tyler. He told one of my co-workers. “This is my brother. His name is 5678, but we call him Tyler.” Later, he told my co-worker, “I was just kidding. His name is really Tyler.” I’ve joked that I’m going through a pre-mid-life crisis wondering what I want to be when I grow up. As Wrigley and I were talking about what he wanted to be when he grew up, I said I wasn’t sure what I wanted to be. He looked at me, as serious as could be, and said, “Mommy, you’re so silly. You’re already growed up.” Brooklyn wants to be a business owner when she grows up — maybe she’s influenced by me and my Mary Kay and Tastefully Simple businesses. Brooklyn’s idea business, to me as a mom, is so heart-warming. She said, “When I grow up, I want to start a business that colors pictures for old people who don’t have grandkids to color pictures for them.” She and Wrigley are always drawing and coloring for their grandparents. Wrigley agreed that was a good idea and said, “That sounds awesome, Brooklyn. I want to do that with you.” The kindness of children is wonderful. At a birthday party recently, Wrigley and his buddies were talking about wrestling when they got daycare the following week. They all agreed it would be a good idea and were really excited about it until one of the boys mentioned they might get in trouble and have to stand in the corner. They paused and in unison said, “BORING!” Just a few days ago, Wrigley tried to talk my husband into playing bumper cars with the others parents at daycare because it’d be “fun”. Oh, the things kids say. You never know what is going to come out of their mouths … more often than not, it’s funny! —– Halea Franklin